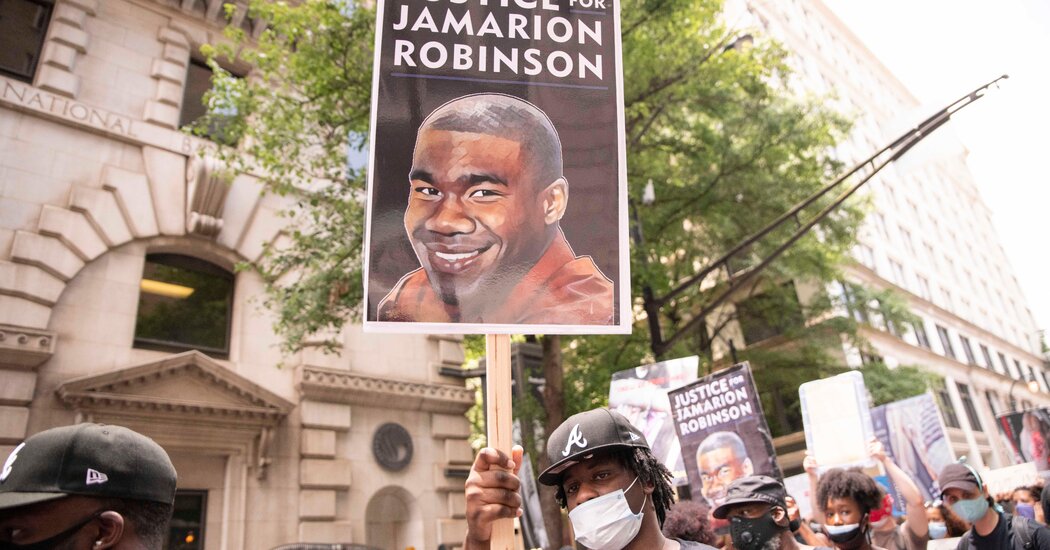 Jamarion Robinson was killed in 2016 by members of a fugitive task force when they tried to arrest him in Georgia. Investigators say that he opened fire on the officers.

Two Atlanta-area law enforcement officers were charged this week with felony murder for their roles in a confrontation in 2016 with an armed man who was shot nearly 60 times as they tried to arrest him, according to court documents.

The officers — identified in an indictment as Eric A. Heinze, a deputy U.S. marshal, and Kristopher L. Hutchens, a Clayton County police officer — were members of a fugitive task force that had been serving an arrest warrant for the man, Jamarion Robinson.

The task force members told the Georgia Bureau of Investigation that Mr. Robinson had fired a handgun at them two or three times on Aug. 5, 2016, after the officers broke through the door of his girlfriend’s apartment in East Point, Ga., a Fulton County suburb of Atlanta.

Mr. Robinson, 26, had been wanted on charges of attempted arson and aggravated assault of a police officer, according to the officers, who said that he still refused to drop his gun after being shot. Three task force members shot at Mr. Robinson, state investigators said.

Mr. Robinson’s relatives said that his body had been riddled with 59 entry wounds and 17 exit wounds before it was dragged down a flight of stairs — in what relatives described as evidence tampering. The officers continued shooting Mr. Robinson after using a concussion grenade known as a flash-bang that had burned him, his mother, Monteria Robinson, said in an interview on Wednesday.

“Someone stood over my son and shot down into his body,” Ms. Robinson said. “They all say that my son fell to the ground, so why did they shoot another 80 or more volleys at my son?”

A spokesman for the Fulton County District Attorney’s Office did not immediately respond to a request for comment on Wednesday.

The 21-page indictment, which was returned by a grand jury in Fulton County on Tuesday, did not elaborate on the nature of the charges against the two officers or their actions.

In addition to two counts each of felony murder, Mr. Heinze, 44, and Mr. Hutchens, 47, were charged with aggravated assault with a deadly weapon, first-degree burglary, two counts of making false statements and two counts of violating the oath of a public officer.

Mr. Heinze and Mr. Hutchens did not immediately respond to requests for comment on Wednesday. It was not clear whether they had lawyers. Their status as law enforcement officers was also not clear.

At the time of Mr. Robinson’s death, he had been preparing to re-enroll at Tuskegee University in Alabama, where he had played football, his mother said. For more than five years, she said, she had been pressing prosecutors in Georgia to weigh charges against the officers involved in the fatal shooting.

“They just found a mother who fought back,” Ms. Robinson said. “I wasn’t taking their false narrative. The grand jury saw right through the lies as well.”

Ms. Robinson said that she had hired a private investigator and enlisted the help of the noted forensic pathologist Dr. Michael Baden to seek justice for her son. She disputes the contention that he had opened fire on the officers.

Ms. Robinson, 53, said that a third officer who was involved in her son’s shooting had since died.

In 2018, The Atlanta Journal-Constitution reported that Paul Howard, the Fulton County district attorney at the time, was suing the Justice Department over its failure to disclose information about the shooting of Mr. Robinson.

Mr. Robinson’s family has also filed a lawsuit in federal court against the Marshals Service and several task force members over the fatal shooting. The Atlanta branch of the N.A.A.C.P. has been supporting the family’s efforts.

“When you look in that house and you see the carnage that was left, that was nothing more than an execution,” Gerald A. Griggs, a lawyer for the N.A.A.C.P. in Atlanta and the first vice president of the organization’s local branch, said in an interview on Wednesday. 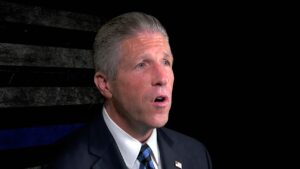 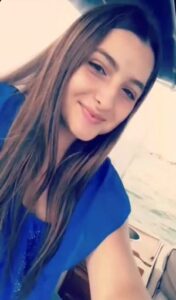