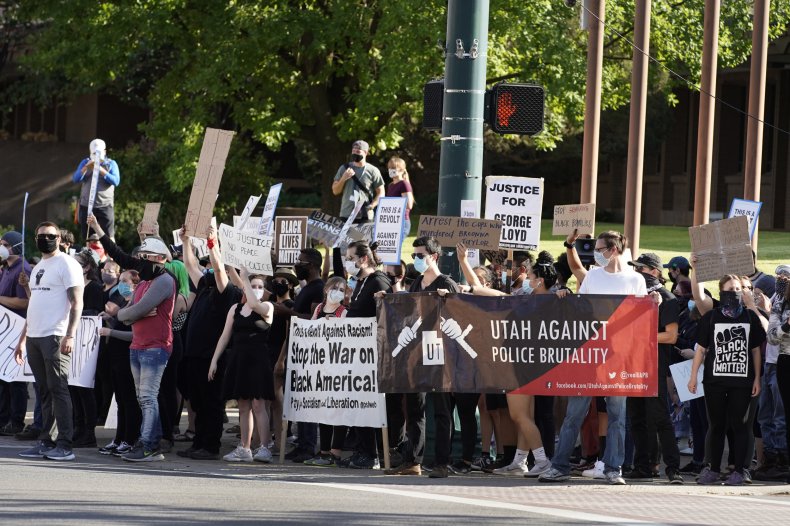 A Utah man who was shot twice after driving into a group of Black Lives Matter protesters is now running for mayor in the city of Provo, he said, to fix the problems he personally encountered.

In a campaign video, Ken Dudley explains that he’s running for Provo mayor because he’s had a number of concerns over the years but was never sure what to do until last summer.

Dudley said that on June 29, 2020, he was driving to Home Depot for plumbing materials. Traveling through downtown Provo, Dudley came across a demonstration against police brutality during a wave of civil unrest ignited by the murder of George Floyd.

“A group of protesters surrounded my vehicle, holding me hostage,” Dudley said. “I tried to leave, as safely as I could, but in the process, I was shot twice by a Black Lives Matter protester.”

He said that the first shot went through his arm, right below the elbow, and stopped when it hit his other arm. He suffered a shattered arm bone. Dudley said that he tried to move forward but was ultimately slowed down, and the shooter was given another opportunity to fire.

The second bullet hit the passenger seat and fragmented, which caused a piece of shrapnel to slice through his eyelid and destroy his tear duct.

Dudley said he was bleeding profusely and believed he was going to die if he didn’t make it to a hospital. The mayoral hopeful then said a police officer told him he was unfortunately in the wrong place at the wrong time, while another cop allegedly responded it was because of Dudley that the demonstration stopped.

“This has just been a great paradigm shift for me to think ‘I’m not a victim, I was in the right place at the right time,'” he said.

However, Dudley’s retelling doesn’t mention all of the details surrounding the event.

According to The Salt Lake Tribune, Dudley was driving a Ford Excursion down a bike lane heading toward demonstrators in a line across the intersection. He also doesn’t mention that video footage captures Dudley driving through the protesters and accelerating as he began hitting them.

Dudley’s website for his campaign states, “The fallout from this harrowing incident inspired Ken to commit to running for public office to ensure Provo’s citizens and their families are safe and that their streets and homes are secure.”

In the video, the SUV is seen pushing protesters and then a loud pop can be heard. Thirty-three-year-old Salt Lake City resident and protester Jesse Taggart was later arrested and faces a criminal trial in connection to the shooting.

Taggart’s legal team argues that he was lawfully exercising Utah’s Stand Your Ground law when he shot Dudley in an effort to protect himself and others. His attorney, Shane Johnson, said that Dudley’s campaign is an embodiment of how the Provo community has treated his client and Black Lives Matter protests.

After hearing of Dudley’s experience, an armed militia group called the United Citizens Alarm formed and have since promoted Dudley for mayor on its social media channels.

“I feel very humbled to be the instigator of these patriots that stood together to help our community and that’s what I want to do,” Dudley said.