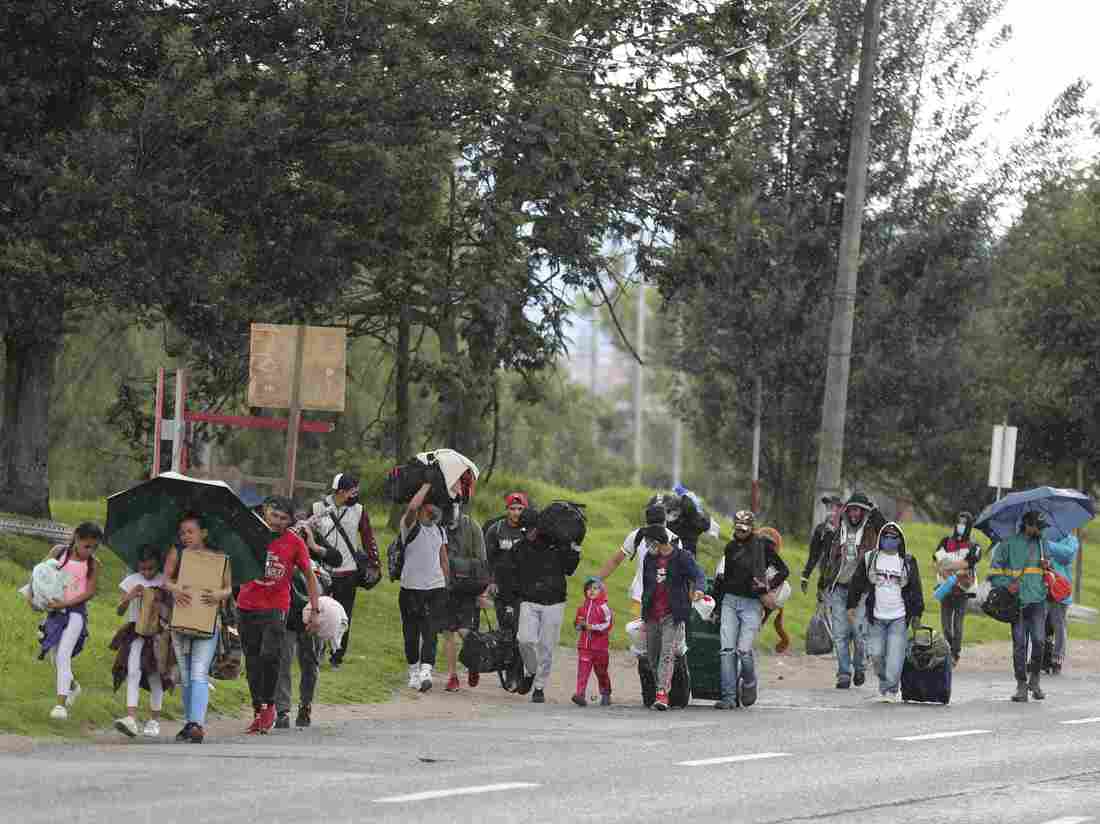 Nearly 2 million Venezuelans fled to Colombia in recent years to escape their country’s devastating economic crisis and rebuild their lives. But Colombia’s coronavirus lockdown has thrown many of these newcomers out of work and some are now trying to get home — by any means necessary.

Among them is Yordelis García. Unlike some of the returning migrants, she and her family can’t afford bus fare. So they’ve started walking from Bogotá, the Colombian capital, to the Venezuelan border some 450 miles away.

García carries a backpack and pushes her 2-year-old son in a stroller. Her 8-year-old twin boys pull roller suitcases. Meanwhile, her husband struggles with a homemade cart piled high with their belongings. But one of its wheels is broken so the metal cart scrapes along the pavement.

The family had been scraping by in Colombia for the past year, operating a bike taxi in a Bogotá slum. But their meager income dried up as Colombia locked down in late March to prevent the spread of COVID-19. Explaining their decision to leave, García says: “The landlord was pressuring us for rent. We could no longer afford food for the kids.”

As of Monday, Colombian migration officials said 12,000 Venezuelan migrants had returned to their home country on 290 buses since the lockdown began. That number does not include thousands of walkers. Jairo Yáñez, mayor of the Colombian city of Cúcuta on the Venezuelan border, puts the exodus at 40,000 to 50,000, which includes Venezuelans crossing on clandestine foot paths used by smugglers. 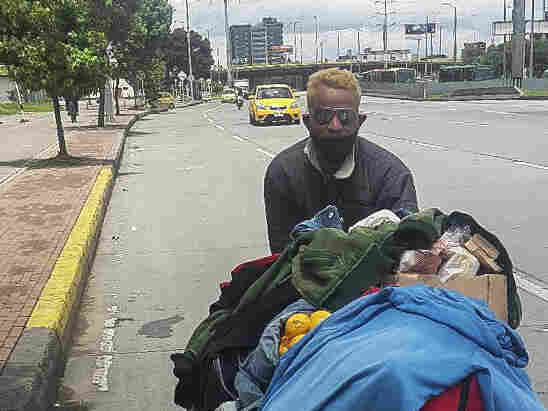 Felix Ruiz, a Venezuelan migrant, pushes a cart along the highway out of Bogotá. John Otis for NPR hide caption

Deyson Padrón, who heads Gran Acuerdo Venezuela, a private charity in Bogotá that assists Venezuelan migrants, predicts these numbers will surge. He points out that most migrants in Colombia are day laborers who, if they don’t work, don’t eat.

The Colombian government has promised Venezuelan migrants emergency food and has ordered landlords not to evict them during the pandemic. But Padrón says the decree isn’t being enforced and that they are being kicked out of apartments and rooming houses in droves. Not even begging in the streets is an option for desperate migrants due to Colombia’s nationwide lockdown.

Things have gotten so bad that half of all Venezuelan migrants in Colombia face malnutrition or starvation, according to a new report from the World Food Program.

Yet the journey back to Venezuela is also an ordeal. Nearly all flights and intercity buses in Colombia have been halted. So, many start walking in hope of hitching a ride. But due to the lockdown, traffic is sparse while many drivers refuse to stop for fear that passengers could infect them with the coronavirus, says Bram Ebus, a consultant for the International Crisis Group.

“I spoke with Venezuelans who had been on the road for weeks without getting any rides,” he says.

Those who can afford it are chartering buses. But the buses often are pulled over for inspections by police and health officials who fear passengers could spread the virus. Five of the buses that had recently departed Bogotá had hit so many roadblocks and delays that after 24 hours it had traveled just 10 miles. 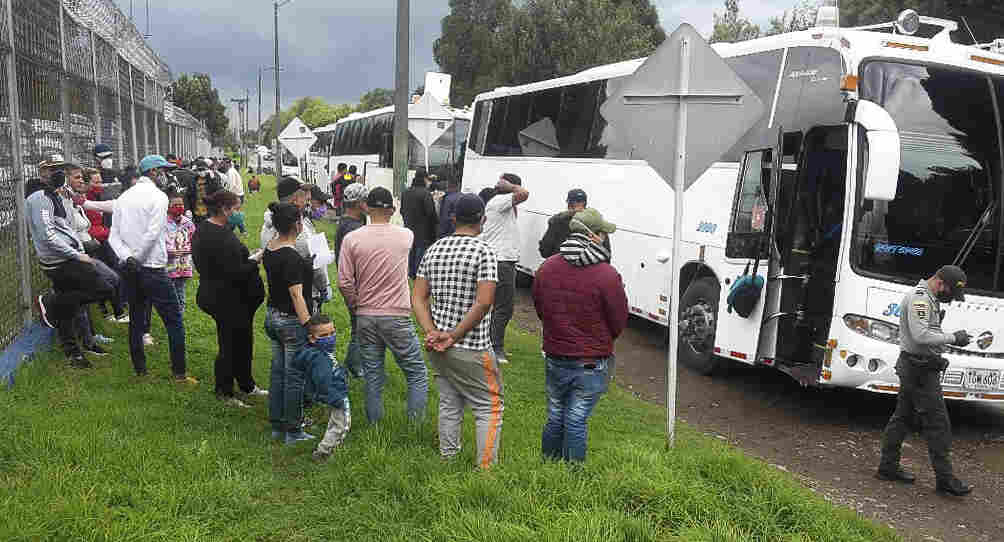 Venezuelans, who chartered buses in Bogotá for the 450-mile trip to the Venezuelan border, wait as the vehicles are inspected by police and health officials. These buses had hit so many roadblocks and delays that after 24 hours they had traveled just 10 miles from the Colombian capital. John Otis for NPR hide caption

“They want to get rid of us yet they’re not allowing us to leave,” says Reynaldo Sala, one of the exasperated Venezuelan passengers.

But Ebus says conditions will likely be even worse for Venezuelans who make it to their homeland. For starters, he says, they will be quarantined for two weeks, often in empty schools and sports facilities that lack water, food and beds. Then, they’ll have to contend with Venezuela’s hyperinflation, unemployment and shortages of food, gas and other goods.

In many cases, “there are no buses to take them back to their cities,” Ebus says. “So after a long walk to the border, what awaits them inside Venezuela is another long walk.”

Finally, should the returnees contract COVID-19, they’ll have to seek treatment in a crumbling health system. According to a report this month from the International Rescue Committee, more than half of all doctors have left Venezuela, nearly all hospitals report shortages of medicine and there are just eight hospital beds per 10,000 people.

But Sala, the passenger on the stalled bus bound for the border, points out that in Venezuela, returning migrants can live rent free with their relatives. And he adds: “If we’re going to go hungry, at least we’ll go hungry with our loved ones.”