The Latest: Airlines could begin testing for coronavirus 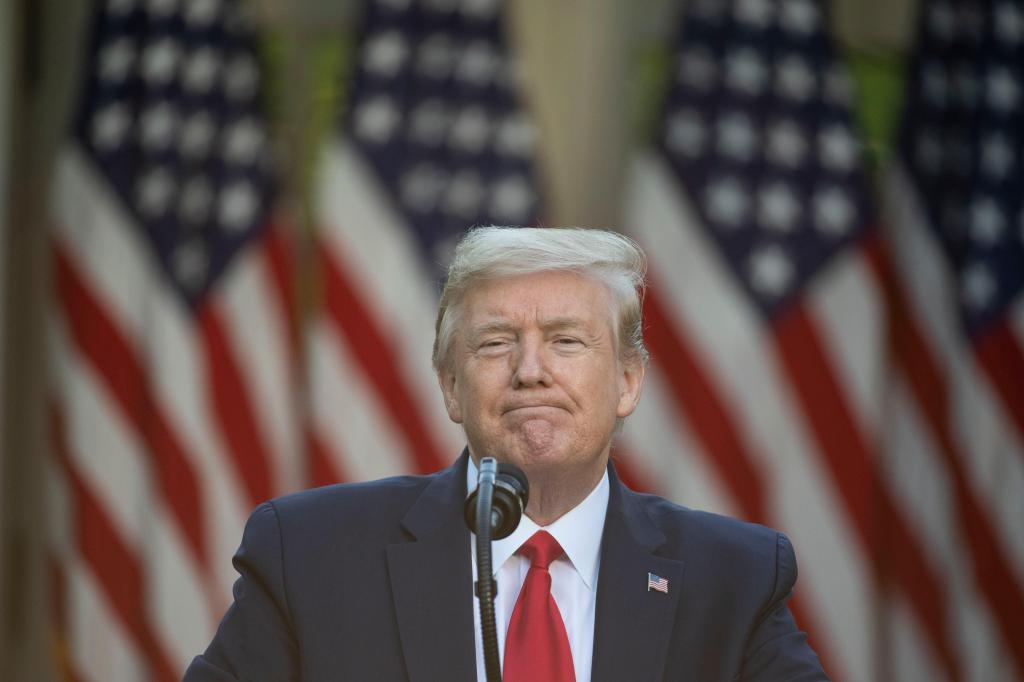 The Latest on the coronavirus pandemic. The new coronavirus causes mild or moderate symptoms for most people. For some, especially older adults and people with existing health problems, it can cause more severe illness or death.

TOP OF THE HOUR:

—Putin extends Russia’s shutdown to May 11.

WASHINGTON — President Donald Trump says his administration is talking to the airline industry about giving passengers temperature checks and testing them for the coronavirus.

Trump also says it “sounds like a good idea” for passengers to be wearing a face mask while on the plane.

The comments come as Trump meets at the White House with Republican Governor Ron DeSantis of Florida about that state’s plans for loosening restrictions on the economy put into place as a result of the pandemic.

Florida health authorities have attributed many of the state’s COVID-19 cases to people traveling from other hot spots, including Europe, Nile river cruises, the New York City area and Latin America.

DeSantis tells Trump that his state’s ability to test people for the virus exceeds current demand and that moving to the first phase of reopening the economy should not be a heavy lift.

SOAVE, Italy — Italian Premier Giuseppe Conte says the risk of a new contagion ‘’is concrete,’ as Italy moves into a new phase of living ‘’alongside’ the coronavirus with the loosening of some lockdown measures starting next Monday.

Conte has been visiting some of the hardest-hit communities in the northern region of Lombardy in a sign of institutional support for the sacrifices of medical personnel and solidarity with citizens in their eighth week of total lockdown. The number of people testing positive for the virus on Tuesday topped 200,000, while deaths rose by 382 to 27,359, according to civil protection agency figures. Those figures have been easing since the March 27 peak, but the virus continues to spread, in particular in the north.

BRUSSELS — A top European Union official says the bloc plans to work together with African countries to try to help secure them debt relief so their economies can better cope with the ravages of the coronavirus.

Speaking after talks with the leaders of Burkina Faso, Chad, Mali, Mauritania and Niger, European Council President Charles Michel says “we have agreed to lead this debate together.”

Michel says “there is a legitimate question: how is it possible to support the African countries by opening this political debate about the debt relief?”

He says the 27 EU countries will work together on the question with the five countries of northern Africa’s Sahel region and global partners like the International Monetary Fund.

ANKARA, Turkey — Turkish Airlines says it is further extending its suspension of international and domestic flights over the coronavirus pandemic until May 28.

The announcement comes a day after Turkish President Recep Tayyip Erdogan said the country could begin to ease some restrictions after the Eid holiday, at the end of May.

Turkey has banned travel to and from 31 of the country’s most-populated provinces, where it has also declared weekend lockdowns. It has also imposed partial curfews for citizens above the age of 65 and below the age of 20.

MOSCOW — Russian President Vladimir Putin has extended the nation’s partial economic shutdown through May 11, saying the coronavirus outbreak is yet to reach a peak.

Speaking in a conference call with top officials Tuesday, Putin says the shutdown that began at the end of March and was to expire on April 30 has slowed contagion. Lockdowns imposed by Russian regions have kept most people, except those working in vital industries, at home.

Russia has recorded 93,558 coronavirus cases and 867 deaths. Moscow has accounted for about half of the cases.

Putin instructed the government to prepare a plan for gradually lifting the lockdown after May 11. He also promised new steps to support businesses and restore the economic damage from the outbreak.

ATHENS, Greece — Greek Prime Minister Kyriakos Mitsotakis has outlined the plan for a gradual lifting of the coronavirus lockdown.

“We accepted, as a society, the need for economic activity to be paralyzed in order to save human lives,” Mitsotakis said in a televised address to the nation Tuesday. “As we limited the first wave of the virus, we are ready to pass into the second phase of our plan: the gradual de-escalation of the measures.”

However, the prime minister noted, “nobody can rule out a possible rekindling of the threat.”

Mitsotakis says the lockdown would be lifted in stages starting May 4, when some retain stores reopen and Greeks won’t have to carry a self-written document certifying they are outdoors for one of six specific reasons. Travel restrictions outside of people’s home region will remain in place for two more weeks.

Churches will be accessible for private prayers and people can later attend services on May 17. Other retail businesses will reopen on May 11, with social distancing restrictions.

SOAVE, Italy – The mayor of Venice is inviting tourists to see the cleaner lagoon city as a result of shutdowns to contain the spread of coronavirus.

Luigi Brugnaro says, ‘’We have seen octopuses in the Grand Canal, we have seen fish return, the waters clean. These are spectacular moments.’

Brugnaro acknowledged tourism to the city of canals won’t reach the usual 30 million visitors. Italy is only starting to ease its two-month lockdown next week, although it remains unclear when travel between regions will be allowed.

The mayor is asking the government for financial help. He’s requested extending short-term unemployment coverage from nine weeks to a full year, guaranteed allowance of at least 600 euros ($650 dollars) to seasonal tourism workers through the first quarter of 2021 and increased state-backed loans to 50% of 2019 revenues for small- and medium-sized businesses.

PARIS — French Prime Minister Edouard Philippe has outlined a plan to fight the coronavirus by testing everyone who has come in contact with an infected person.

Philippe announced the plan while addressing lawmakers at the National Assembly. He says when a person tests positive, individuals that have been close contact with that person — regardless of whether they have any symptoms or not – will be tested.

Philippe says, “All these contact cases will be tested and will be asked to isolate themselves.”

He says France aims for at least 700,000 tests each week a when lock down restrictions begin to ease on May 11.

WASHINGTON — Treasury Secretary Steven Mnuchin says any loan exceeding $2 million from the Paycheck Protection Program will result in an audit before the loan is forgiven.

The announcement stems from concern over large companies gaining access to a program designed to help small businesses weather the coronavirus pandemic. Mnuchin says on CNBC the Small Business Administration will conduct reviews that makes sure “the intent for the taxpayers is fulfilled here.”

Mnuchin says it was up to borrowers to certify they met the parameters for receiving a loan. He says the borrowers “have criminal liability” if they made a false certification.

Some companies, such as Shake Shack and the Los Angeles Lakers, have returned the loans.

CANBERRA, Australia — The Chinese Foreign Ministry has again dismissed Australia’s call for an independent inquiry into the coronavirus, saying a senior Australian diplomat agrees that it is not the time for such an investigation.

Australia’s call for an international inquiry independent of the World Health Organization into where the respiratory virus came from and the United Nations agency’s handling of the emerging pandemic is placing increasing strain on Australia-China relations.

Chinese Ambassador Cheng Jingye warned in a newspaper interview published on Monday that pursuing an inquiry could spark a Chinese consumer boycott of students and tourists visiting the country and sales of major exports, including beef and wine.

The Chinese Embassy on Tuesday released a statement saying Adamson “admitted it is not the time to commence the review now and Australia has no details of the proposal.”

MINSK, Belarus — The UN has urged Belarusians to stay home amid the growing coronavirus outbreak, after the country’s health authorities registered 900 new infections in the biggest daily surge.

“It is time for immediate, and extensive, measures to reinforce physical distancing,” said Joanna Kazana-Wisniowiecki, the UN Resident Coordinator in Belarus. “Stay home to stop the spread of COVID-19. It will help medical workers and all of us to cope with the crisis.”

Belarus has reported 12,208 cases of the virus and remains one of the few countries that hasn’t imposed a lockdown despite repeated calls to do so from international organizations.

Tuesday is a national holiday in Belarus, when hundreds of thousands of people flock to cemeteries to honor the deceased. President Alexander Lukashenko refused to ban the tradition this year and says he’d visit the graves of his ancestors.

Lukhasenko has ruled the country with an iron fist for more than two decades. He has repeatedly dismissed concerns around the pandemic as “mass psychosis,” saying Belarus can handle the outbreak without a lockdown.

LONDON — An official says the British government’s virus contact tracing app will be ready in two to three weeks.

Britain and many other countries are developing mobile apps to help reduce infections after they ease lockdown restrictions.

He told Parliament’s science and technology select committee the rollout will be part of a wider post-lockdown strategy that includes expanded testing.

The app will use Bluetooth signals to anonymously log when a user comes into close contact with others. The data is kept on devices. But if users later develop COVID-19 symptoms or get positive test result, they can choose to upload the data to a central server so those contacts can be alerted.

Gould says such an approach would maintain user privacy while allowing authorities to see any patterns in the movement of the virus.

Iwona Soltys, a spokeswoman for a government hospital in Warsaw, tweeted that Stanislaw Bigos has recovered. She wished him plenty of health, positive thinking and energy in the future.

Deputy Interior Minister Blazej Pobozy tweeted it was “super news coming from our hospital.” He sent greeting to Bigos and congratulations to the doctors.

The demonstration was one of the first in the Netherlands against the government’s measures to contain the coronavirus. Bars, restaurants and museums have been closed since mid-March and people have been urged to stay home as much as possible and observe social distancing if they go outside.

The majority of the population has adhered to what Prime Minister Mark Rutte has called the “intelligent lockdown.”

Many shops closed their doors voluntarily because customers were staying indoors. Dutch branches of home furnishing giant Ikea opened their doors Tuesday for the first time since March 17 amid strict social distancing measures. Restaurants and children’s play areas in the stores remained closed.

KYIV, Ukraine — Authorities in Ukraine have started to ease lockdown restrictions enacted since March 12 to curb the spread of the coronavirus.

In Kyiv, authorities plan to lift some of the restrictions on May 12 to allow beauty parlors, shops and parks to reopen if there isn’t a spike of new infections. Prime Minister Denys Shmyhal says similar gradual measures may be taken throughout the country.

BERLIN — The German government is counting on Deutsche Telekom and software giant SAP to develop its coronavirus infection tracing app.

Germany’s Health Ministry says the main feature of the app will be swiftly informing users about contact they had with people who tested positive for the new virus, allowing them to self-isolate and thereby interrupt the chain of transmission.

Officials say the app will use Bluetooth technology to detect other devices in the vicinity. Anyone who tests positive can voluntarily inform contacts via the app that they might have been exposed to the virus, without revealing their identity. 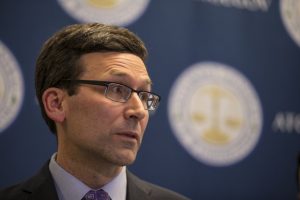 Coronavirus unemployment: State pays one of every eight claims