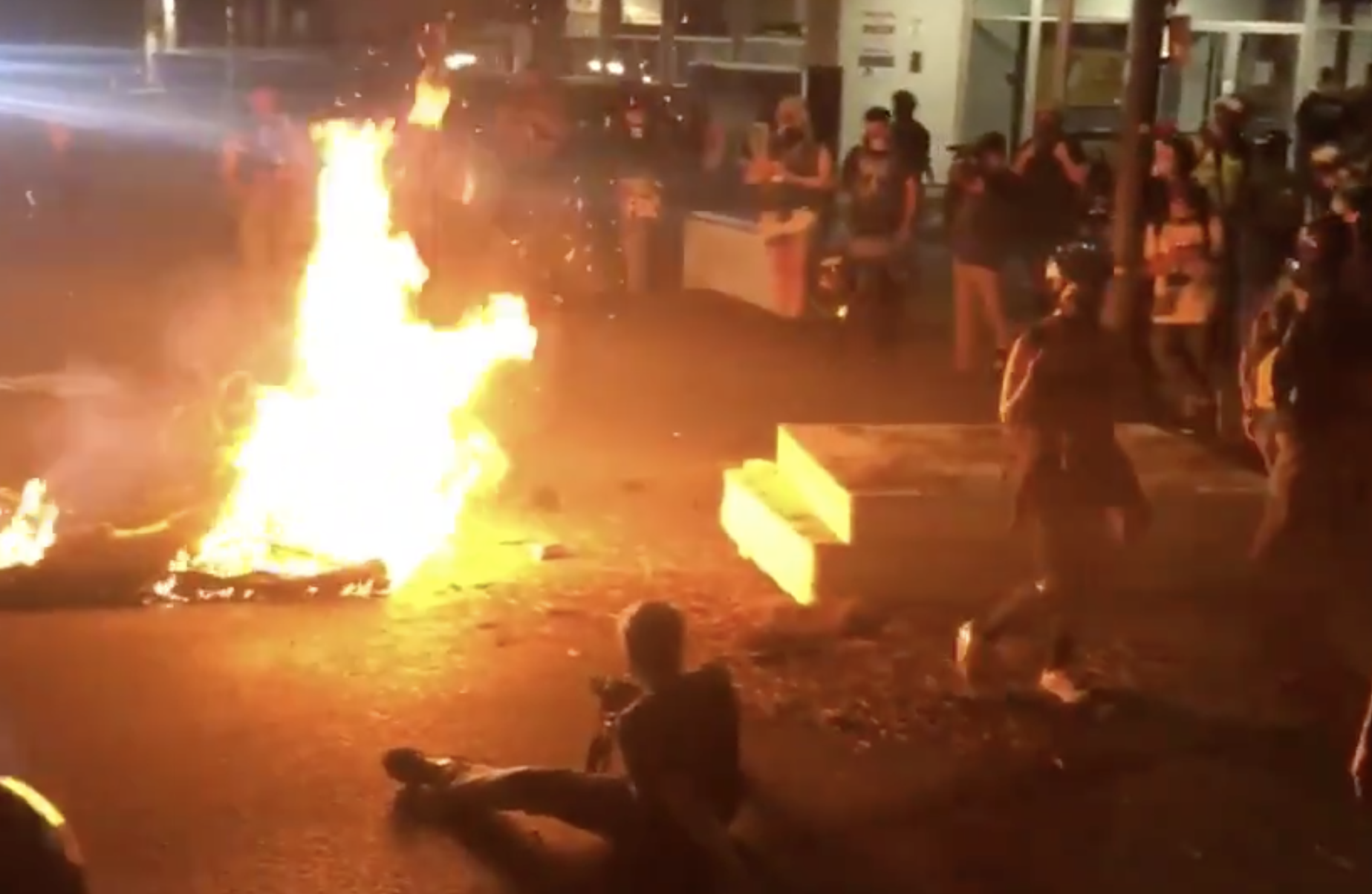 Over 100 days of rioting and unrest continues in major U.S. cities following the death of George Floyd in May. Labor Day weekend was no exception. While some cities saw their first round of chaos this week, others suffered yet another long night of injuries, arrests, and fires.

President Trump condemned the weekend violence in a tweet calling out the “Radical Left Democrat Governors and Mayors” for “weakly” managing the continuing riots.

Rochester N.Y., Brooklyn N.Y., Portland – All had bad nights, all weakly run by Radical Left Democrat Governors and Mayors! Get the picture?

On Saturday, rioters threw objects, yelled, and pushed back on police in Portland. Reports of “firebombs, rocks, mortars,” and other objects were thrown at officers who “used tear gas for the first time in weeks” according to local news.

One rioter appeared to catch fire after running through flames on the street. Police reportedly succeeded in putting out the man’s clothes on fire.

Graphic: Another angle of the person being set on fire by a Molotov cocktail thrown by antifa militants in SE Portland. Rioters try to help but don’t do much. Cops are the ones who rush in & put out the flames. Video by @BGOnTheScene. #PortlandRiots pic.twitter.com/9gNFo73Lyc

“I think it’s going to keep going on until the election,” said one Portland protestor, 23-year-old Tupac Leahy. “I don’t see it slowing down.”

Video shows fireworks and other munitions going off on the road in front of a row of houses.

Police are making repeated announcements. This remains a riot. Members of the group have thrown Molotov cocktails injuring at least one community member. Failure to disperse may result in arrest citation crowd control agents including tear gas and/or impact weapons.

It’s like a war zone in the residential area of SE Portland where antifa are rioting tonight. #PortlandRiots pic.twitter.com/UkgoL4pRPB

You can see the Portland protester running around with their legs on fire at the beginning of this videopic.twitter.com/O6b1fC0OHq

The fire started by BLM-antifa in north Portland tonight is continuing to grow. They set a mattress on fire. #PortlandRiots #antifa pic.twitter.com/2TkllOk3rJ

By the end of the weekend, over 50 people were arrested on charges of assaulting a public safety officer, riot, disorderly conduct, interfering with a peace officer and others.

Over 50 arrested at the Portland #antifa riot on 5–6 Sept. The riot was organized & promoted by antifa ahead of time to celebrate over 100 days of riotious violence. They used firebombs & explosives in a residential area, causing one to be hospitalized. https://t.co/3tGbdL5GIW pic.twitter.com/bXanY4rbS0

Oregon Gov. Kate Brown signed a letter along with elected officials and members of the community on Thursday condemning the violence in Portland. Most of the letter, however, is devoted to defending those who are “peacefully protesting” and denouncing “white supremacy or vigilantism.”

“As elected officials and community leaders, we are coming together to condemn the acts of violence in Portland that have occurred as thousands of Oregonians have been peacefully protesting for racial justice and police accountability,” the letter says. “The violence must stop. There is no place for white supremacy or vigilantism in Oregon. All who perpetrate violent crimes must be held equally accountable. Together, we are committing ourselves to do the hard work that will bring meaningful change for racial justice and police reform.”

Brown t00k her opinions a step further in a written statement claiming that President Trump is encouraging and exploiting the violence for his own gain.

“For the last several years, and escalating in recent months, President Trump has encouraged division and stoked violence. It happened in Charlottesville. It happened in Kenosha. And now, unfortunately, it is happening in Portland, Oregon,” she said.

In a press conference the day after a “100% Antifa” man shot and killed a conservative man, Portland Mayor Ted Wheeler also took the liberty to shift blame from rioters and Antifa to focus on attacking Trump.

“Do you seriously wonder, Mr. President, why this is the first time in decades that America has seen this level of violence?” Wheeler said in an afternoon press conference. “It’s you who have created the hate and the division.”

Despite acknowledging that Portland “police officers have been spread too thin by three months of nightly protests for racial justice and against police violence,” Wheeler also refused federal law enforcement offered to him by Trump.

“Yet again, you said you offered to aid Portland by sending in federal law enforcement to our city. On behalf of the City of Portland: No thanks,” Wheeler wrote in an open letter that Trump shot back at on Twitter.

….He tried mixing with the Agitators and Anarchists and they mocked him. He would like to blame me and the Federal Government for going in, but he hasn’t seen anything yet. We have only been there with a small group to defend our U.S. Courthouse, because he couldn’t do it….

A protest in Seattle “suddenly turned violent” on Labor Day after multiple “anti-police” protestors attacked officers with “rocks, bottles, explosives” and “bear spray” outside of the police union building.

Crowd continuing to throw rocks, bottles, and at officers near 6th and Royal Brougham.

Molotov cocktails were also found on the scene after reportedly “being tossed in the street and catching fire.”

According to KOMO News, 22 people were arrested but sources say that “recent restrictions on crowd control weapons leave officers with fewer options when confronting riots like the one that happened on Labor Day.”

Despite the ongoing violence lead by anti-police rioters, popular worship leader Sean Feucht says the city shut him down for trying to host a worship service in a park.

Protests and riots began after video released of the death of Daniel Prude while in police custody back in March surfaced. According to reports, the video shows “officers holding Daniel Prude on the ground with a spit sock on his head” until he stopped breathing. Prude died a week later after being “declared brain dead at the hospital.”

Police and protestors clashed in Rochester on Friday night resulting in 11 arrests and 3 injured officers. Rioters threw objects at the officers, shot off fireworks, and set fires.

On Monday morning, a group of protestors “naked or in minimal clothes” sat outside of the city Public Safety Building wearing spit hoods in protest of Prude’s death.

Other demonstrations and protests began to turn rowdy on Monday, where Rochester Police report that bottles were thrown at officers and that a police barricade was breached.

Protesters have taken down our first set of barricades. Officers are holding in place.

Hundreds of officers are now lining up with riot gear, including shields and batons pic.twitter.com/8RpK6gmRpD

Other videos of riots last week show fireworks being shot at officers in riot gear and protestors “smashing tables and harassing patrons into leaving” restaurants.

The protest has turned in to a dangerous protest. #ROC pic.twitter.com/R8HPq2TN2f

Last night in Rochester, video appears to show protestors “shutting down restaurants” by smashing tables and harassing patrons into leaving.pic.twitter.com/MfAE892Ih1

Multiple people were arrested for rioting on Friday after causing “an estimated $100,000 in damages” to buildings on “Manhattan’s Foley Square up to 24th Street.” The group reportedly smashed windows for three hours before being arrested.

According to Fox News, one of the rioters charged with “rioting and two counts of weapons possession” spent her summer protesting in Portland. 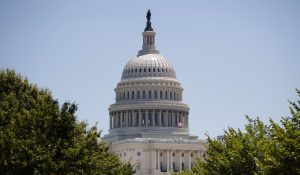 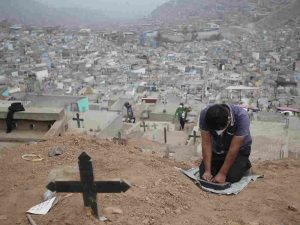 Peru Locked Down Early. Now It Battles One Of The Worst Coronavirus Outbreaks 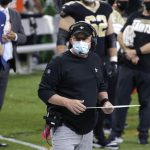 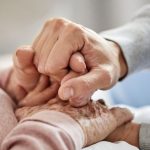 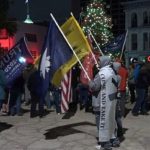 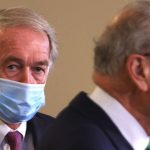