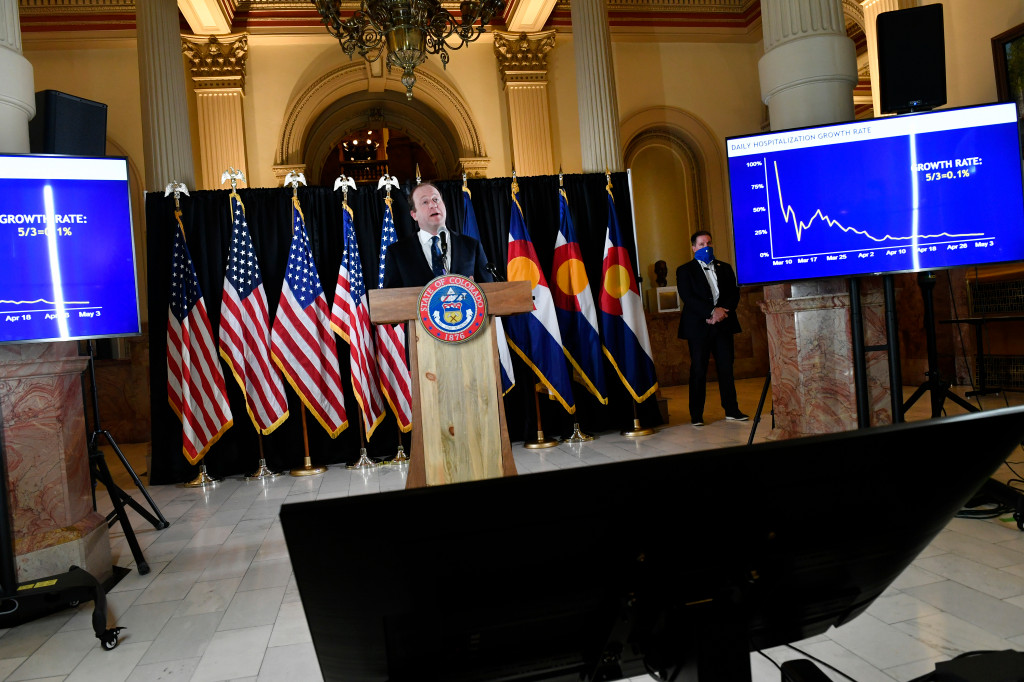 In the time that’s passed since April 2, when Colorado Gov. Jared Polis last sat for an interview with The Denver Post, at least 961 people have died from the new coronavirus and 18,801 people have tested positive for it, according to the state. Polis has also lifted the statewide stay-at-home order in an effort to begin reopening the economy.

Recall that Polis was reluctant to issue that stay-at-home order in the first place, compared to metro area mayors and state lawmakers who’d been calling for that step for days before Polis took it. He was also much quicker to reopen — albeit only partially — the state’s economy than his peer Democrats in other states.

He now says he thinks Colorado’s coronavirus peak may have already passed. Last month, state experts predicted the peak would fall as early as May 8 and as late as September.

The following conversation took place on May 7 and has been edited for brevity and clarity.

It was two months ago this week that you announced the first known cases of the coronavirus in Colorado. What do you think the state has gotten right, and what do you wish the state had done differently?

Well, I think we acted early enough to prevent mass casualties like occurred in New York, to prevent our hospital system from being overwhelmed, and we were able to meet the medical needs of people who were infected, and stop the exponential curve in cases. At the same time, very early on we got together our economic recovery team, chaired by Federico Peña, a bipartisan team that represents different sectors of our economy, that really has been very helpful in helping to make sure we can recover economically from the aftereffects of this public health crisis, which is likely to be with us for weeks and months to come.

Jill Hunsaker Ryan, the director of the state health department, said on April 6, “We are certain our peak has not yet hit.” Do you feel certain of that, at this point?

If you’re asking if we think there’s a greater peak ahead, I think nobody knows that. We certainly — this will be with us for many months to come. It really depends on the responsible choices that the people of Colorado make, to be able to try to stay six feet from others, to limit their social contacts, to wear masks when they’re in public. If Coloradans are able to do those things for the long haul, the peak’s behind us. If Coloradans run out of patience and engage in risky behavior, it’s also possible the peak is ahead of us.

Do you think there are more deaths ahead of us or behind?

I don’t think anybody knows at this point. I can tell you if Coloradans succeed in social distancing, in wearing masks when they go out for the next several months, it’s certainly possible the peak is behind. If people let up and stop being vigilant, the peak could still very well be ahead.

What metrics will you be watching that would trigger a decision to reimplement measures like “stay-at-home,” if things go poorly under the reopening?

The work with the increased testing … is to jump on infection outbreaks at the site level, before they spread to the community level. I think Coloradans should expect to see specific site closures. It could be workplaces or factories where transmission is occurring, closing down early, isolate the employees, prevent it from becoming community-wide. If it becomes community-wide, there could very well be community-wide restrictions in places, and we plan to act very boldly and work with the county health departments to try to prevent any kind of statewide crisis.

One area with a huge outbreak is the JBS meatpacking plant in Greeley. It sounds like there is not a program in place to ensure testing for all their workers. Why is this facility open at all? Seven people have died.

Well, they closed for 14 days, which will be similar to the protocol around other outbreaks. We wish that they facilitated the testing through the company, but we set up free testing for anybody — with symptoms, without symptoms — less than a mile from (JBS) and over 1,000 people came and were tested.

But generally speaking, what a site-specific lockdown would look like would mean something like a 14-day closure and testing.

Do you think it’s safe for JBS to be open now?

Well, I’d much rather see everybody tested, but I’m glad that we’ve tested well over 1,000. That’s probably about a third to a quarter of their workforce that have gotten tested, roughly. We also tested family members and others that might not work there, but well over 1,000 people were tested, and really anybody who showed up was able to get a free test.

We’re also seeing outbreaks in correctional facilities. Denver’s jail has dozens of people with the virus. There are hundreds of people who have it at the prison in Sterling. Why haven’t more incarcerated people been released?

This is happening across the country. It’s not so much that the virus spreads more in a particular kind of institution, but any place with congregate living. So, a prison, a college dormitory, a senior housing facility, shared facilities. All of these kinds of facilities led to a quicker spread. We quickly implemented, several weeks ago, the best protocols that we can in the prisons, consistent obviously with people keeping safe and ensuring that justice is carried out, meaning when there’s positive cases, those cells are locked down.

Would you like to see more people released, or do you feel comfortable with the efforts to this point?

Well, people have to serve their terms. There’s no question. The parole board has been very active in people who are eligible for parole trying to process those quicker, and I think they’re done a good job doing that.

It’s been well documented that working from home is an economic privilege. Does it worry you that many who are being called back into work under “safer at home” will be poorer and more vulnerable?

You know, working from home is certainly a safer thing, and for those who can continue to work from home, for those who have unemployment insurance benefits, for those who have any other kind of income, they can afford to stay at home. But for most Coloradans, there’s really not a — you have to be able to earn a living and pay your rent and put food on the table. And we want to make sure there’s every opportunity to do that in our state, that’s as safe as possible.

State budget writers are working as we speak to slash billions in spending. History suggests that the next year might be even worse for the budget, and maybe the year after that, too. What do you think should be done, both in short and longer terms?

The most important thing for families and for the state is just to get the economy going. That’s why we’ve been very thoughtful about our economic recovery efforts, that’s why we’ve delayed tax filings and done everything we can to provide more flexibility for the private sector. I’ll also note there are several Colorado industries that are being hurt over a longer period of time. Like, we don’t know when tourism and recreation will come back in the way it was. There are other sectors, like manufacturing and aerospace, where it might be a shorter-term hit.

Do you expect that the next ski season will start on time?

I certainly hope so, if the health condition allows it. There are two or three areas that hope to have some limited skiing this June. And we’re certainly hopeful there will be sufficient protocols … that in November, in December, people will almost certainly be able to ski, although it might not look like prior ski seasons, right? We don’t yet know if our communities in Colorado are going to be able to welcome visitors from across the world.

The Committee to Unleash Prosperity, which is led by a former senior Trump advisor, Stephen Moore, just gave you an “A” grade for how you’ve handled the reopening of the economy. Given your many differences with the Trump administration, I’m curious whether that “A” grade gives you any pause.

Well, I didn’t know that Steve Moore had done that. He’s been the editor of the Wall Street Journal for many years. That’s his main bona fide. I think like a decade or two, that was his main work, around covering the business sector.

(Editor’s note: Moore has written for the Journal and served on its editorial board, but was not the paper’s editor.)

But, look, we’re thrilled to have strong work to get the economy going — among the strongest of all the states. I’m also hopeful that we have good grades and good results on the health side as well. Those are two areas every governor should be graded on, as well as the president of the United States, are the health response and the economic response.

I’ve seen some coverage of Colorado’s reopening, particularly from national outlets, framed around you being a progressive who’s acting on a timeline we’re seeing more from Republican governors. Do you consider yourself a progressive?

Well, you know, I don’t think anything to do with the health position is conservative, progressive, moderate. It’s about every governor really doing their best to look at the data in their state and make the best decisions. Progressives, conservatives all want the economy running as quickly as possible. They all want to keep people safe, and they’re all making the best decisions they can.

I understand that position, but is “progressive” a label you’d use for yourself?

You know, I let others describe my work. Many have described it as progressive. I don’t label myself anything, but many folks — I was in the Progressive Caucus in Congress, I had a progressive voting record. I mean, many folks have called me that. I don’t shy away from it. I don’t shy away from whatever you want to call me, as long as you don’t call me late for dinner. I mean, you can call me a progressive, socialist, conservative, capitalist, moderate, whatever you want. It’s all in the eyes of the beholder.

You also sat on the Liberty Caucus in Congress. Your friend there, Rep. Justin Amash, is looking seriously at running for president as a libertarian candidate. Would you consider voting for him?

Oh, Justin is my solid second choice for president after Joe Biden. I would much prefer him to the current president. He’s a man of principle and integrity, and he’s a good friend.

Finally, a non sequitur: The USPS is in trouble, trying to stave off bankruptcy. You’ve previously argued that the Postal Service should be privatized. Do you still believe that? What, if anything, do you think should be done now to rescue it?

What’s paramount is ensuring that we have a reliable parcel and letter delivery service through the U.S. Postal Service. If they can raise capital on the private market, they should do that. If they can get government funding, they should do that. But I think nothing should be off the table in terms of preserving the institution of the U.S. Postal Service, the critical services that they supply, as well as protecting their workers. 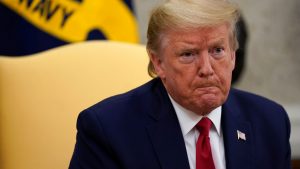 Here’s Why The Coronavirus Death Toll Is Likely Underreported 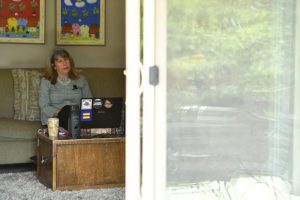 As coronavirus upends funerals in Colorado and elsewhere, there’s hope the pandemic will spur openness about grief