Steven Baca, a former city council candidate and son of a local sheriff, shot a skateboard-wielding assailant as left-wing rioters attempting to topple a historic monument on Monday threatened his life for protecting it.

The evidence indicated that Scott Williams, clad in the all-black uniform commonly associated with the domestic terrorist group Antifa, may have been carrying knives after knocking Baca to the ground with his skateboard.

The video shows four assailants surrounding Baca prior to the shooting and other would-be attackers out of frame, including one who shouts “I’m gonna [expletive] kill you!”

Bernalillo County District Attorney Raúl Torrez said the Albuquerque Police Department had neglected to identify the owners of multiple weapons found at the scene, including knives, and had failed to interview key witnesses at the scene, Reuters reported.

“There have been rumors on social media about what transpired in the final seconds before this and we are actively looking into those and whether or not this was justified,” Torrez said during an online press briefing. “The reason [Baca] is not facing that charge right now is because this investigation is not complete.”

Torrez was forced to drop the initial shooting-related charge of aggravated battery with a deadly weapon while the police investigation remains open.

However, he is still charging Baca with unlawful carrying of a deadly weapon for not having a concealed-carry permit, and also with three counts of aggravated battery for the melee that occurred at the statue immediately prior to the shooting, according to KRQE.

Baca, who is of Hispanic descent, allegedly pulled a woman to the ground and injured other protesters as they attempted to use chains and a saw to hack down the bronze statue of Spanish conquistador Juan de Oñate outside the Albuquerque Museum.

Baca’s lawyer, Jason Bowles, said he would plead “not guilty” to all charges, the Albuquerque Journal reported.

Central to both sides of the case will likely be determining who the “first aggressor” was.

According to Torrez, New Mexico law prevents the person who instigated an alleged assault from claiming self-defense.

But at least one unnamed eyewitness told the Daily Mail that it was the left-wing mob that first threatened Baca, who initially sought to defend himself with non-deadly means.

‘The man in the blue shirt was protecting a few of the pro-Oñate statue people, and when it began to get heated he left the scene,” said the person.

“But a mob began to follow him to his car and yell in his direction,” the witness continued. “As they approached, he took out his pepper spray and warned them not to come closer. They advanced on him and he discharged the pepper spray.”

Police, who were in the area but only responded after the shots were fired, defended the decision by claiming they did not wish to escalate tensions.

It is unclear whether the would-be vandals faced any charges over the destruction of property, although Democrat Albuquerque Mayor Tim Keller subsequently had the statue removed, using the dangerous situation created by the leftist protesters to justify their desired outcome.

“This sculpture has now become an urgent matter of public safety,” Keller claimed in a statement Monday night.

Also unknown is whether Baca was there in connection with the New Mexico Civil Guard, a citizen patrol that had been engaging civilly with the radical protesters—while exercising their open-carry rights—for more than an hour before the skirmish.

Guard members reportedly formed a barrier around Baca after the shooting to prevent him from further harm. However, the group said on social media that Baca, who was clad in a blue T-shirt rather than military fatigues, was not a member, KVIA reported.

Laura Schauer Ives, an attorney for the far-left American Civil Liberties Union who said online that she was representing Williams, promoted a conspiracy theory via Twitter that suggested the group was colluding with police.

Ives retweeted a claim that the guard group was part of the QAnon movement, an apparent progressive boogeyman, although no evidence supports the suggestion of a vast right-wing conspiracy at hand.

Contrary to those claims, the Albuquerque police—like the mayor and district attorney—in fact seemed eager to rush to a premature judgment against Baca and scapegoat the citizen peacekeepers.

Police Chief Michael Geier, newly installed by Keller as part of an “Obama mayor’s pledge” to reform law-enforcement, accused the group of vigilantism and “instigating” the violence.

Message from APD Chief Michael Geier: “We are receiving reports about vigilante groups possibly instigating this violence. If this is true will be holding them accountable to the fullest extent of the law, including federal hate group designation and prosecution.”

“The heavily armed individuals who flaunted themselves at the protest, calling themselves a ‘civil guard,’ were there for one reason: To menace protesters, to present an unsanctioned show of unregulated force,” she claimed.

The guard’s Facebook page states that its mission is to “provide rapid local lawful response to emergency and dangerous situations, including Natural disaster, humanitarian crisis, civil disturbances, and civil defence.”

As leftists have pressed forward with demands for blue states to “defund the police,” several such pro-Second Amendment groups have cropped up nationwide. 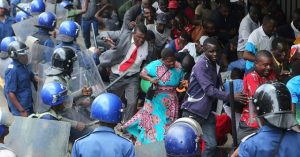