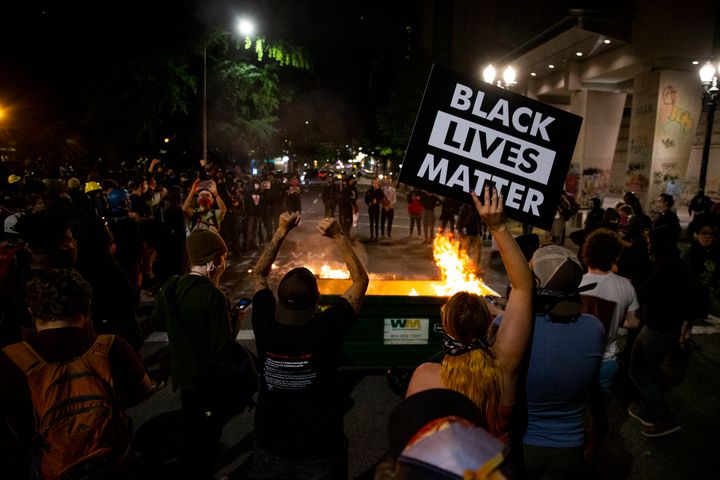 PORTLAND, Ore. (AP) — Nearly two months of nightly protests that have devolved into violent clashes with police have prompted soul-searching in Portland, Oregon, a city that prides itself on its progressive reputation but is increasingly polarized over how to handle the unrest.

President Donald Trump recently deployed federal agents to “quell” the demonstrations in Portland that began after George Floyd’s death at the hands of Minneapolis police, shining an unwelcome spotlight as the city struggles to find a way forward. The national attention comes as divisions deepen among elected officials about the legitimacy of the more violent protests — striking at the heart of Portland’s identity as an ultraliberal haven where protest is seen as a badge of honor.

“I was born and raised here, and I’m a graduate of the local public school system. I chose to make my livelihood here, I chose to raise my daughter here,” said Mayor Ted Wheeler, who has faced criticism from all sides. “And in all the years that I have lived here, I have never seen the community more divided. Nor have I seen it look worse.”

Small groups of protesters have set fires, launched fireworks and sprayed graffiti on public buildings, including police precincts and the federal courthouse, leading to nearly nightly clashes with police who have used force that’s caused injuries. Similar unrest engulfed many U.S. cities when Floyd died after a white Minneapolis police officer pressed a knee to his neck on May 25. But in Portland, which is familiar ground for the loosely organized, far-left activists known as “antifa,” or anti-fascists, the protests never stopped.

Dave Killen/The Oregonian via AP A waste receptacle’s contents are in flames as protesters gather in downtown Portland, Ore. on July 10, 2020. The mayor of Portland said late Sunday the U.S. Marshals Service are investigating the injury of a protester who was hospitalized in critical condition over the weekend after being hit in the head by an impact weapon fired by a federal law enforcement officer.

Lost in the debate are the downtown businesses racking up millions in property damage and lost sales and the voices of the hundreds of thousands of Portland residents who have stayed off the streets.

“The impact is terrible because what people have seen on the TV … has scared people who live outside the downtown. They feel it’s that way 24 hours a day,” said David Margulis, who said the protests have caused sales at his jewelry store to drop more than 50%. “I talk to people, on the phone, who tell me: ‘I don’t know if I’ll ever come downtown again.’”

Soon after Floyd’s death, diverse crowds of thousands took to the streets every night for peaceful marches and rallies, filling a bridge that spans the Willamette River on several nights. Smaller groups, however, quickly turned to vandalism.

Police have arrested dozens of people, dispersing protesters with tear gas on multiple occasions. Federal law enforcement officers sent in two weeks ago by Trump to stop the unrest have further inflamed tensions, particularly after one protester was critically injured when a federal agent fired a non-lethal round at his head.

The mayor and police have repeatedly decried the clashes as a destructive distraction from the Black Lives Matter movement and make a sharp distinction between peaceful demonstrators and those bent on engaging with authorities, whom the police call “agitators.” Other officials, including several city commissioners, Democratic Gov. Kate Brown and Oregon’s House speaker, have criticized the police for being too aggressive.

“Each night’s protest is now turning into a protest of the night before’s police activity. And so when people say we want this to stop, it can’t stop because today’s protest will be about what the feds or the Portland Police Bureau did yesterday,” said Gregory McKelvey, an activist and critic of the police response. 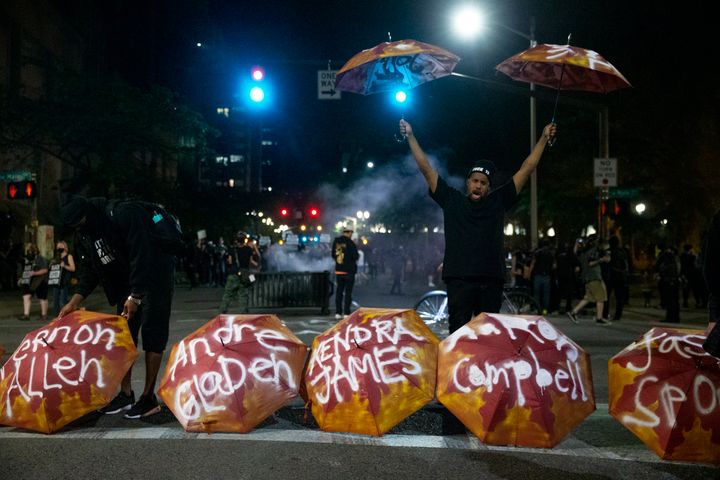 Dave Killen/The Oregonian via AP Umbrellas bearing the names of people killed by police were displayed at SW 3rd and Main as Portland protesters gather downtown on July 10, 2020.

“There’s really this battle that we’re having right now — a communications war over who’s a ‘good protester’ and who’s a ‘bad protester.’ And what the police and the mayor are trying to do is turn the city against the people that are out protesting,” he said.

Some members of the Black community, which makes up less than 6% of Portland’s population, say the continual clashes with police — including in a historically Black part of the city — are distracting from the message of racial justice.

“It’s very clear to me that this is not about accomplishing goals. This is about anarchy, and people are taking advantage of the demonstrations for their own reasons that have nothing to do with social justice,” said Ron Herndon, a prominent civil rights activist. “Any support you think you could get, you probably have lost from a lot of people because you have negatively impacted their lives.” 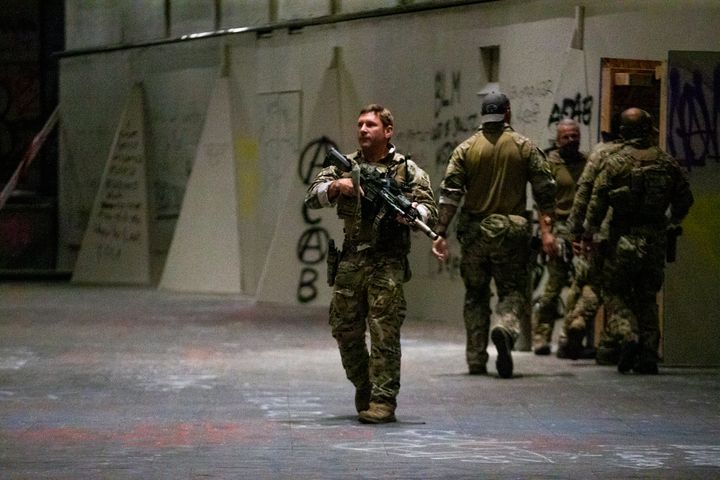 Dave Killen/The Oregonian via AP Federal officers pull a protester into the Federal Courthouse on July 10, 2020, as protesters gather in downtown Portland.

Jo Ann Hardesty, the first Black woman on Portland’s City Council, said protesters don’t need to destroy property to effect change but believes the violence is a reaction to a newfound understanding, particularly among white people, about “how abusive the police can be.”

Nevertheless, Hardesty, who has dedicated her career to police reform, is confident Portland will come out of this stronger. She’s working to get a measure before voters — circumventing the powerful police union — to create an independent police review board. She also led a push last month to cut $27 million from the police budget.

“We have to all figure out, how do we move the city forward? What we know is that we can’t protest forever and ever. And what we know is that people want real change,” Hardesty said. “I think the more we invite people in, the less disruption we’ll see on our streets.” 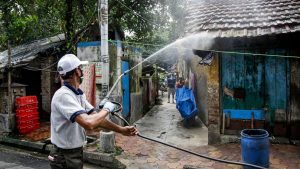 Lockdowns reimposed in India as virus cases near 1 million