Americans Are Losing Faith In What The Government Says About Coronavirus 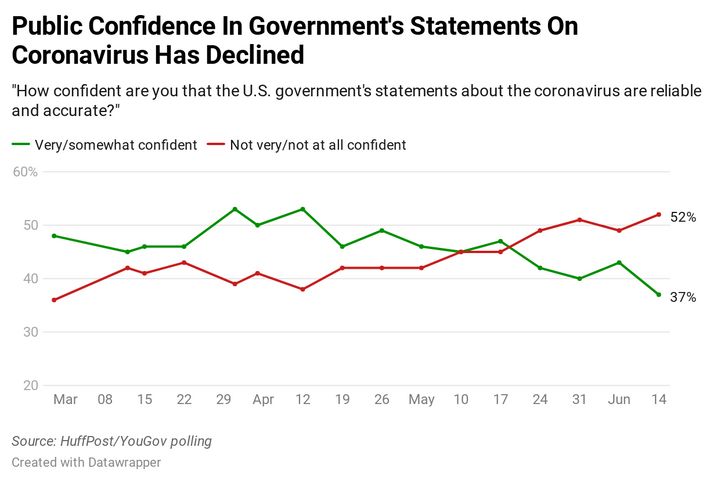 Americans are losing confidence in federal guidance about the coronavirus, a new HuffPost/YouGov poll finds.

Similarly, only one-third of the public expresses any confidence in President Trump’s statements about the disease, with a 56% majority expressing little or no confidence. The government’s overall approval rating for handling the coronavirus is also underwater, as is Trump’s own rating on the issue.

At the start of the crisis, polling shows, public skepticism was much lower ― as recently as April, a slim majority of the public expressed confidence in government statements. Within the past month, however, that number has notably declined.

A 56% majority of Republicans still say they’re at least somewhat confident in government information, while just 39% of independents and 29% of Democrats say the same.

Ariel Edwards-Levy/HuffPost Results of HuffPost/YouGov tracking data on trust in the government on coronavirus.

The poll’s findings come as states take a patchwork of approaches to reopening their economies, even as some report rising cases of the virus. Top coronavirus task force officials, meanwhile, have become less visible.

Four in 10 Americans now describe themselves as “very concerned” by the spread of coronavirus in the U.S., down from a peak of 58% in early April. Twenty-nine percent are very concerned that they or a family member will contract the disease, down from a high of 46%.

Yet the threat of the disease continues to play a prominent role in daily life across the country, and most people polled support some level of continued restrictions. A 72% majority of Americans still say they’re making an effort to stay home as much as possible.

Just 21% say there are too many restrictions in place where they live, with 41% saying restrictions are at about the right level, and 30% that restrictions aren’t stringent enough. A 58% majority are more concerned that states will lift stay-at-home orders too quickly, compared to 27% who fear they will not be lifted soon enough.

Use the widget below to further explore the results of the HuffPost/YouGov survey, using the menu at the top to select survey questions and the buttons at the bottom to filter the data by subgroups.

The HuffPost/YouGov poll consisted of 1,000 completed interviews conducted June 12-14 among U.S. adults, using a sample selected from YouGov’s opt-in online panel to match the demographics and other characteristics of the adult U.S. population. 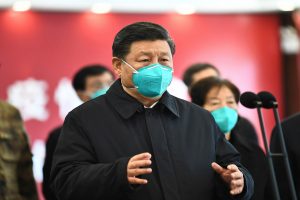