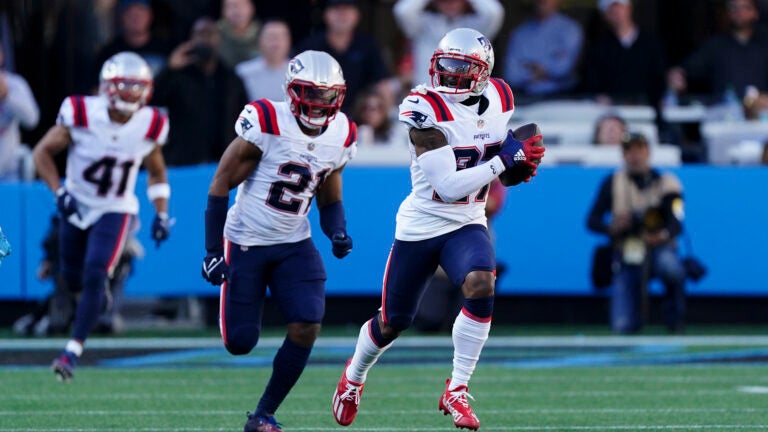 The Patriots firmly believed they were better than what they showed at the beginning of the season when they started off 1-3 and lost four straight games at home to open the season.

They’re starting to prove themselves right.

New England thrashed the Carolina Panthers on the ground and had Sam Darnold seeing ghosts of seasons’ past during a dominating 24-6 road victory — the Patriots’ third consecutive win and fourth straight road win to open the year.

It wasn’t exactly the ultra-efficient beatdown New England authored against the New York Jets or the rousing win last week against the Los Angeles Chargers. But domination comes in many forms, and the Patriots have now done it in three straight weeks.

This version served as yet another clear example of the Patriots winning the way Bill Belichick and his coaching staff likely envisioned before the season: with a strong rushing attack and a stingy defense.

Maybe the Panthers would’ve been better off playing P.J. Walker after all.

Darnold had already been almost unbelievably bad against the Patriots coming into this game, completing just over 50 percent of his passes and sporting a ghastly 1:6 touchdown-to-interception ratio.

The Patriots exposed him once again on Sunday, just like the good old days when the former No. 2 overall pick played for the New York Jets.

J.C. Jackson picked Darnold twice, including an 88-yard interception return for a touchdown, and linebacker Jamie Collins added an insane leaping grab near the line of scrimmage for another.

Matthew Judon sacked the Panthers quarterback with the team driving late in the game to kill a possible touchdown drive.

Every time Carolina showed signs of life, New England’s defense snuffed it out with big plays.

Meanwhile, those positive moments for the Panthers consisted almost solely of short throws to running backs Christian McCaffrey and Chuba Hubbard, who then squeezed more yards out after the catch. Explosive wideouts D.J. Moore and Robby Anderson combined for just 32 yards receiving.

Christian Barmore (two passes defended) grows more disruptive by the week. Jalen Mills and Myles Bryant, who had a bone-crunching hit on Moore late in the game, rose to the challenge against a dynamic receiver group. Dont’a Hightower and the linebacker group flew around.

This is a playoff-caliber unit when it plays like this.

Stephon Gilmore got his revenge against the Patriots when they tried him early in this game, giving them a taste of what they’ve been missing in his return from injury.

But Jackson was the best cornerback on the field by a mile, and that’s all New England cares about at this point.

The Patriots’ top corner recorded his second multi-interception game of the season and got his first career touchdown on his 88-yard pick-six. He now has five interceptions on the year.

His 12 passes defended this season are already just two off of his career-high of 14 from last season, and he’ll stand a good chance of hunting down his nine-interception mark from last year with eight games left to go.

It hasn’t always been perfect for Jackson, who has gotten unlucky on a few jump balls that have turned into big plays down the field this season. But any doubt about whether the former undrafted corner could be “the guy” on the outside should be fading with every week that passes.

That also means Jackson’s price tag is only getting more expensive each time he gets his hands on a football.

Whether it’s a long-term extension or a franchise tag, the Patriots’ best corner is going to see some money come his way this coming offseason. You certainly can’t deny the $3.384 million second-round tender New England signed him to this spring has been quite the bargain so far.

Mac Jones is clearly operating the Patriots’ offense at a higher level than Cam Newton did last season, but the team’s offensive identity still revolves around its running backs.

That position group carried the day for the Patriots both on the ground (season-high 154 yards rushing) and through the air (74 yards receiving).

Damien Harris scored a rushing touchdown for the 4th straight game, but it was Rhamondre Stevenson and Brandon Bolden carrying New England on their second-quarter touchdown drives.

Stevenson had a career-long 41-yard catch-and-run as well as a few punishing runs to set up Harris’s touchdown, and Bolden had three plays of more than 10 yards on the offense’s next scoring drive. The rookie, in particular, had the best game of his young career, totaling 106 yards combined on 12 touches (his most of the year) before leaving the game with a head injury.

The only downside is that both Harris and Stevenson left the game in the second half with injuries, leaving just Bolden available among running backs. Their statuses for next week won’t be known until later in the week.

That’s a shame because this running back group has been one of the brightest spots on the team of late and is only getting stronger as the season progresses.

While the Patriots winning the football game is ultimately the most important part, the way they executed at points in this contest, especially the start of the game, remains a problem.

The first drive of the game saw Isaiah Wynn (false start) and Ted Karras (holding) commit penalties and Jakobi Meyers bobble a catch that should’ve helped the Patriots convert a first down.

Additionally, after Belichick declined to go for it on 4th-and-1 just short of midfield, punter Jake Bailey pounded the ball out of the end zone for a touchback.

The second drive wasn’t much better as two false starts and a sack allowed put the offense behind the sticks again, leading to another punt.

The Patriots’ last drive of the third quarter ended with Brian Burns walloping Jones for a strip-sack that gave the Panthers the ball with excellent field position–not that they did anything with it.

Fortunately for the Patriots, none of that mattered as the Panthers were no less sloppy and were simply inept offensively for the majority of the game.

But the offense can’t afford to start that way against better teams, like the Cleveland Browns next week, even with their defense playing as well as it is at the moment.