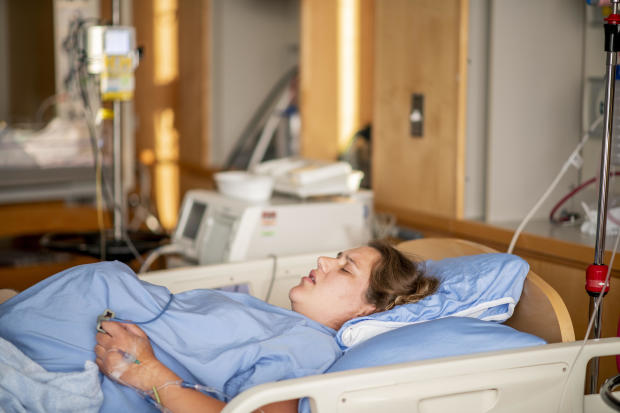 The birth of a child is a pivotal moment. One that is often shared between spouses, even grandparents and siblings. Now, however, due to the rapidly spreading coronavirus pandemic, women across the United States are finding themselves forced to go through labor and delivery alone – a reality that, for many, would have once been unthinkable.

On March 13, Ana Arteaga, a mother-to-be in Watertown, Massachusetts, posted on Facebook: “Just found out that because of new hospital restrictions, I can only have one visitor with me when I give birth … aka my husband. I never thought in a million years that I wouldn’t have my mom with me during one of the most important days/moments of my life. Just devastated.”

Now, she fears she won’t be allowed to have her husband with her either.

Coronavirus: The Race To Respond ›

More in Coronavirus: The Race To Respond

“My clinic called this morning to tell me that Alex can no longer come to my prenatal appointment on Friday and also mentioned my hospital, Mount Auburn Hospital in Cambridge, is considering restricting all visitors to include the one currently allowed for laboring patients,” Arteaga tells CBS News. “And this could happen at any moment. I’m terrified and feel a complete loss of control. Going into a hospital to labor and deliver my first child completely alone is setting up the experience to be traumatic and likely unsafe … What should be one of the most significant and happiest days of our lives is turning into a nightmare.”

At least two health systems in New York have entirely restricted visitors and told pregnant women they cannot have a partner in the room during birth. Getty

A New Jersey woman, who is due May 1 and wished to remain anonymous, told CBS News that she is “an emotional wreck about all of it.”

“I just left a doctors appointment where I was told to prepare myself that my husband would not be at the birth of my child, and that I should buy an iPad so we can video him in,” she said. “While I understand what the hospitals are going through right now and how precious supplies are, I don’t understand their reasoning around this. It is honestly just cruel and inhumane.”

She says the prospect of not having her husband with her in the delivery room is “causing a whole new level of stress and anxiety that honestly can’t be good for the baby or the pregnancy.”

“It is an emotional and scary time for everyone … and I think now, more than ever, we need the support of our partners. As a first-time mom, it is terrifying to think about going through the birth process alone, and it is heartbreaking to think that my husband will miss the birth of his daughter. The only thing I am hopeful for is more testing to become available and maybe hospitals will be able to test my husband and allow him in the room if he is negative.”

Several healthcare systems in New York have implemented new restrictions for visitors as a way to prevent the spread of coronavirus in their hospitals. New York’s Mount Sinai Health and New York Presbyterian are both restricting visitors entirely, and NYU is permitting only one visitor throughout labor and delivery, who cannot be rotated.

The restrictions in New York have led women around the country to rethink their birthing plans, just in case their hospital decides to follow this model and implement similar restrictions.

Some mothers told CBS News that they were looking into switching doctors as late as 38 weeks into their pregnancies, if it meant delivering in a different hospital that still allowed a spouse to be present.

Arteaga, who is due April 7, says the new restrictions led her to even consider a home birth, but she likely won’t end up going that route because it’s extremely expensive.

“Hiring an experienced midwife for a home birth could be at least $3,800,” she says. “That’s the rate I was just given now. And with everything happening and so much financial insecurity, I don’t know if that’s something we can comfortably afford at the moment.”

Midwives in New York City have slammed hospitals’ decisions to limit visitors. “NYC Midwives calls on the State of New York and all New York hospitals to follow W.H.O. guidelines and affirm their commitment to allowing one essential support person to accompany all laboring people,” the group said in a statement.

And as of Wednesday, more than 400,000 people have signed a Change.org petition to safeguard the right of all laboring people to have support during the COVID-19 crisis. 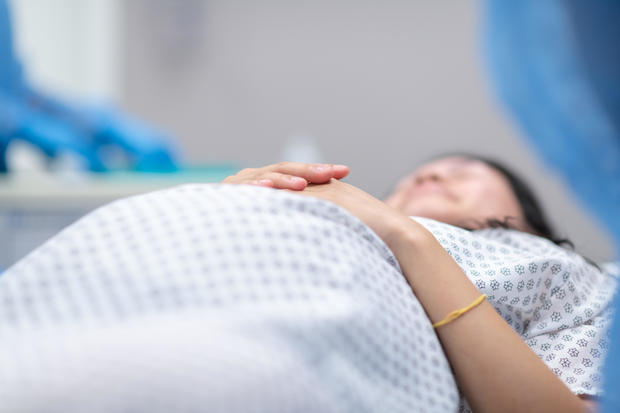 Some mothers told CBS News that they were looking into switching doctors as late as 38 weeks into their pregnancies, if it meant delivering in a different hospital that still allowed a spouse to be present. Getty

“Fundamentally, risks for the people laboring alone will increase substantially. Not only can partners and spouses provide physical and emotional comfort during labor and postpartum, they are also essential in alerting staff when something has gone wrong and the laboring patient cannot notify nurses themselves, like in the event of an eclamptic seizure or a fainting episode,” the petition reads. “Timing is critical in these cases and monitors can be unreliable.”

One expecting mother from Virginia said as of now her husband can be in the delivery room with her, but if that changes, she respects the decision.

“I think that if it came to that, I have to do it alone,” Meredith Celko told CBS News. “At this point, I am very comfortable with my doctor and the nurses in her practice so, if it were to come to that, I would do it. I do not want that to happen at all but I trust them. My husband and I are in agreement that we would do anything to keep the safety of our baby the top priority.”

Celko, who is due April 29, is more worried about the state of the coronavirus pandemic when her baby finally arrives. “My husband is worried that everyone keeps saying the peak hasn’t happened yet,” she said. “I am not due until April, so if the peak happens later, they might go the mother only [in the delivery room] route.”

“My family is worried they won’t be able to see the baby right after it is born because we will most likely be going back to quarantine,” she said.

It is important to note that, until the 1970s, most American hospitals did not allow fathers into the delivery room. And to this day, many single mothers continue to undergo labor and delivery alone. However, for women who had planned on their husbands or other family members being by their sides, the new realities of coronavirus are devastating nonetheless.

CBS News correspondent Nikki Battiste, who is nearly nine months pregnant, is one of those women. “Honestly, it felt like someone knocked the wind out of me. But mostly, my heart breaks for him.” she told Gayle King on “CBS This Morning” on Wednesday.  “Like me, there are so many pregnant women right now in these unthinkable scenarios.”

I never anticipated my life would be a part of a story I’m covering- but now it is. Got through our live segment about pregnant women during this pandemic on @CBSThisMorning – with a lump in my throat. Sending love, courage and strength to all pregnant women ❤️🤰🏻💪🏼🙏🏼⤵️ https://t.co/azQ2h87Ya2

Many hospitals, like the one where Battiste will deliver her baby, are making pregnant women wear masks during delivery. Others are discharging mothers and their babies much sooner than they normally would.

Francesca Benarrosh, who is scheduled to give birth at Florida’s Pembroke Pines Memorial West in a couple of weeks, told CBS News that she “was told, after delivery, as long as myself and baby are okay, they’ll release you immediately.”

“I’m a bit sad being that this is my second child and I would have loved for my son to meet his sister in the hospital. I believe that it is a beautiful experience,” she said. “Also, I’m very nervous about leaving right away. I’ll never get to just enjoy her for even a day alone. Also, the thought of not being able to just rest to myself without my toddler and newborn for even a few hours makes me a little nervous, but I know I will get through it.”

Shaun Lynch, whose wife was induced in Kansas City on Wednesday, told CBS News that they were both screened for COVID-19 upon admission. He also said that he worried he wouldn’t be allowed in during the birth because he works a job at a grocery store that carries with it a high risk of exposure.

“It’s added a distinct layer of anxiety and stress for sure,” he said. “And I still get scared if I should be near my wife to comfort her and whether it is safe to hold my baby when born. But I try to push that aside, block it and stay in our own bubble. Focus on the three of us and just be normal.”

Much like their fellow citizens, in the time of coronavirus, it seems new mothers and fathers are simply adjusting to what that new “normal” is. 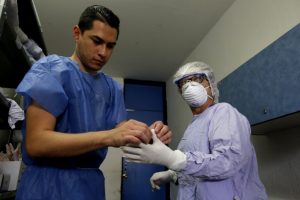 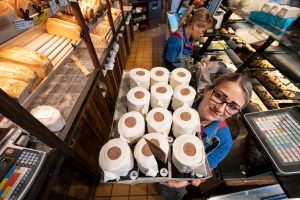