Not too long ago, if you were to map the breweries of Long Island, you’d notice clusters around Bay Shore, Holbrook and Riverhead. You might also see a curious hole, a “brewery desert” of sorts, in the heart of Nassau County.

This brewery-less vacuum is where two childhood friends have staked their flag, opening Lost Farmer Brewing Co. a few weeks ago in an industrial stretch of Mineola dotted with manufacturers and hardware supply (as well as cult favorite Biscuits & Barbecue). Lost Farmer owners Domenick Petralia and John E. Strom unveiled the 7-barrel nanobrewery — a cozy, brick-lined taproom with the brewing equipment on one end, a tasting bar and barrels serving as high-tops, plus a patio with picnic tables. Strom’s construction firm did most of the work.

“We strategically used every part of the space,” said Petralia, who works in medical-device sales by day, He said he and Strom, both craft-beer lovers, had long harbored dreams to open their own operation, and leased the space as COVID still surged. “We looked at the pandemic in the eye and said, ‘screw you.” A resident in Nassau County shouldn’t have to drive 45 minutes to go to a brewery.”

The name “lost farmer” is an homage to the farmers who grow the malt and hops for the brewing industry, said Petralia, “and who get little recognition.” Lost Farmer’s malt comes from the Hudson Valley Malt.

Petralia said Lost Farmer’s head brewer preferred to remain anonymous, but that didn’t stop customers from quickly running through the brewery’s first batches of beer. “It’s been difficult to keep up with demand,” Petralia admitted, and within weeks most of Lost Farmer’s taps were pouring beer and ale from other breweries, such as Mast Landing Brewing Co. in Maine. By late May, the stores were beginning to be replenished, Petralia said, with pale ale, New England- and West Coast-style IPAs, pilsner and a blueberry wheat ale.

While drinkers no longer have to order food with booze in New York state, as they did for most of 2020, the bar snack game at Lost Farmer is strong: Petralia and Strom partnered with East Meadow pizzeria Borrelli’s for personal-sized bar pies ($10), and there is also focaccia ($10) and Bavarian pretzels ($8) on hand. Menus from Biscuits & Barbecue line the bar, and the restaurant will walk orders over to the brewery; food trucks occasionally make appearances.

Also strong: A retro ’80s vibe, reflected in a Pac-Man machine and continuous videos of Fine Young Cannibals and other bygone bands rolling on flat screens above the bar. “We wanted a blast from the past experience,” said Petralia. 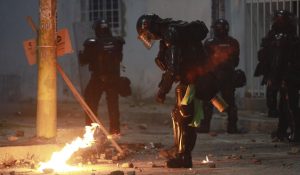 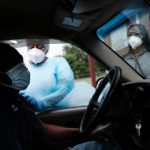 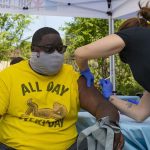