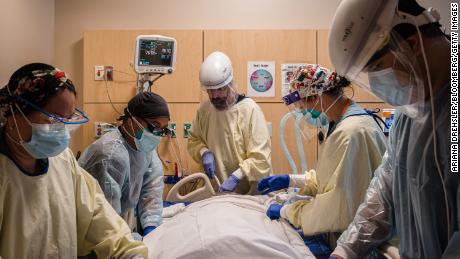 The tantalizing promise borne by the quickening rollout of new vaccines, however, is tempered by warnings from President Joe Biden‘s team that a new cycle of sickness, death and isolation may loom if the country tries to grab its freedom too fast.
On Monday, it emerged publicly that three companies — Moderna, Pfizer and Johnson & Johnson — will deliver sufficient doses to fully vaccinate 130 million people — one-third of the population — by the end of March. And the news gets better. The firms told a key House committee last week that they expect to provide enough vaccine for more than 400 million people — way more than the US population — by the end of July.
Signs of optimism meanwhile in nations such as Israel and the United Kingdom, which are ahead of this country in their vaccination drives, are only fueling hopes that America could be celebrating more than one kind of freedom come July 4.
But tempering this wonderful prospect, one of the Biden administration’s top public health experts delivered a blunt warning on Monday that a recent tumble in new infections had leveled out and more misery could be looming.
“Please hear me clearly. At this level of cases with variant spreading, we stand to completely lose the hard earned ground we have gained,” Dr. Rochelle Walensky, the director of the US Centers for Disease Control and Prevention, said during a White House Covid-19 briefing.
Walensky spoke out as data showed a 2% increase in the seven-day average of new Covid-19 infections, following a steep trek down from a mountainous peak in infections in early January.
“Recent declines appear to be stalling, stalling at over 70,000 cases a day. With these new statistics, I am really worried about reports that more states are rolling back the exact public health measures we have recommended to protect people from Covid-19,” Walensky said.

Tension between an understandable desire of citizens to break out of the grim and grueling purgatory of social distancing and the grave concern of public health professionals that relaxing restrictions will fuel variants of Covid-19 that could make vaccines less effective will define the coming weeks.
Human nature and dire economic need may well drown out yet more warnings from scientists and health professionals. Yet tens of thousands more deaths from Covid-19, when the end seems to be within sight, would be even more poignant than the loss of half a million Americans so far.
This duality between hope and fear is shaping the politics of the pandemic, potentially forcing Biden to call on state and local leaders to slow down to buy time for vaccines to drive down rates of new infection and protect hundreds of millions of people.
The President is due to address the current state of the crisis at the White House on Tuesday, and will be expected to leaven his pledge of better days to come with a sober warning of hard times that must be endured in the interim.
Already, some state and local leaders are reacting to a fast ebbing of the holiday season spike in new infections and deaths by easing restrictions.
Massachusetts is allowing restaurants to open at full capacity — although with social distancing in place. South Carolina is lifting curbs on alcohol sales and mass gatherings. Restaurant restrictions are being pegged back in North Carolina. A clutch of states are also in the process of lifting mask mandates.
The easing of such rules is a response to falling levels of Covid-19 infections. But they also risk the same kind of resurgence of infection seen especially across southern states last summer when then-President Donald Trump aggressively pushed for openings. And with concerns about variants so acute, the situation is even more perilous now.
“This is not the time to relax restrictions,” Dr. Ashish Jha, dean of the Brown University School of Public Health, said on CNN’s “Inside Politics” on Sunday.
“I’m very bullish on where we will be in May, June, July, but March (and) April look like tough months we have to get through and be very careful about,” Jha said.

Getting vaccines into arms 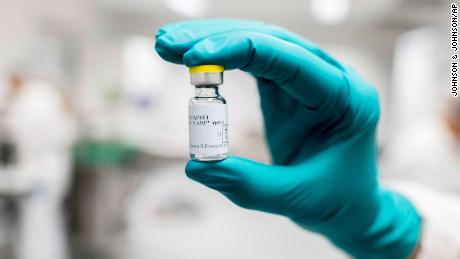 The huge promise of vaccines, and an apparent acceleration in their production and distribution, is not in itself reason to celebrate. There are clear disparities between states in the effectiveness in getting doses into the arms of citizens. That’s one reason why Biden is so adamant about the need for Congress to quickly pass his $1.9 trillion Covid-19 rescue plan, which includes billions of dollars for improving the effectiveness of vaccine programs.
And a return of many lost freedoms in the summer does not rule out a resurgence of Covid-19 when the colder months return and more people gather inside. Scientists predict outbreaks of infection even when the worst of the pandemic has passed. And no one knows yet — because there has not been the time for peer-tested studies — on how long immunity from vaccines will last.
There is also the question of whether at some point, as odd as it seems now, whether the capacity to manufacture vaccines will outstrip the willingness of all Americans to take them. Recent polling has shown that more and more people are willing to get the dose but still short of numbers that would theoretically trigger herd immunity — the moment at which the virus will find it impossible to multiply.
In a poll released Friday, the Kaiser Family Foundation found that 55% of surveyed US adults have either received a vaccine or say they will do so as soon as possible. That figure is up from 47% in mid-January and 34% in early December.
One big concern is over the effectiveness of current generation of vaccines of fast-spreading Covid-19 variants. Most scientists however believe that the inoculations do deliver the most important benefit — protection from serious illness and death from variants first identified in the UK and South Africa.
The government’s top infectious diseases specialist Dr. Anthony Fauci outlined the best way to meet this challenge on CNN’s “State of the Union” Sunday.
“You get variants when the virus has sort of like a complete field of going wherever it wants to go because the people are vulnerable. If you prevent that by public health measures and vaccination, you’ll dampen the effect of these variants,” he said.

As Americans wait for their freedoms to return, they can look overseas to countries with smaller populations for a glimpse of what may be to come.
Global cruise line Royal Caribbean International announced on Monday it would begin voyages from Israel through the Greek Islands and Cyprus in May for fully vaccinated passengers and crew members. The journeys will be an important test for an industry devastated by the pandemic.
Traffic is returning to clog Israeli streets and the shutters of non-essential businesses are opening up in some Israeli cities, CNN’s “Meanwhile in America” newsletter reported last week. Early data from Israel shows that the Pfizer-BioNTech vaccine, which is also currently being offered in the United States, is effective at preventing serious illness and death and is helping to ease fears of health systems being swamped.
British Foreign Secretary Dominic Raab told CNN’s “New Day” on Monday that more than 20 million people in the UK — nearly one-third of the population — had already had at least a first vaccine dose.
“We’re getting schools open this time next week, then we’ll be opening up things like grassroots sport and a little bit more opening up of the mixing that can be done outdoors socially,” Raab said.
“Then in April, we’ve got a further step and in May and June, we’ll hopefully progress towards a more substantial opening up of the restrictions.”
Britain — which has generally handled the pandemic poorly, although its vaccine effort has been a success — appears to have learned a bitter lesson that premature openings will cause more unnecessary sickness and death before the pandemic ends. Its pubs and restaurants aren’t up and running until mid-April for instance, and then only for outdoor dining.
The same question of how and when to reopen, hopefully for the last time, is now before America as the great hope that vaccines bring is tempered by the loss and grief that could unfold in the meantime if things are rushed. 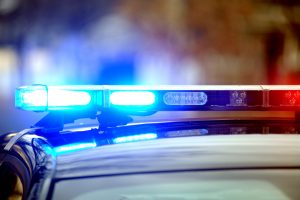 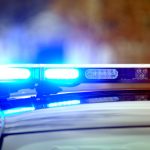 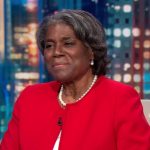 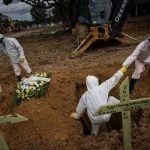 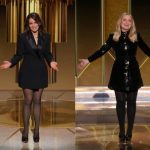