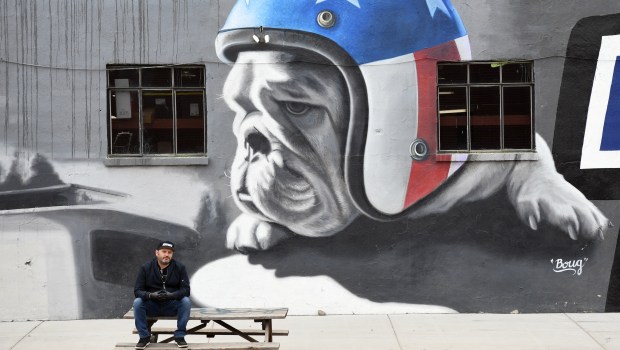 Artist Patrick Kane McGregor immortalizes his English bulldog “Boug” on many of his murals on businesses throughout the metro area including this one covering the wall on Erico Motorsports in the River North Art District on April 23, 2020 in Denver.

Artist Patrick Kane McGregor is known for the large, colorful murals he paints on buildings around Denver, but these days he’s producing smaller versions of his work to help friends in the restaurant business during the coronavirus crisis.

McGregor is working with Jon and Lindsey Lamb, who own Like Minded Productions in the River North Art District, on the project. The Lambs are producing posters of McGregor’s work. Proceeds from the sales are going to the employees of some of the businesses that hired McGregor to create art for their buildings.

The plan took shape as the artist began painting in his photo-realistic style on the boarded-up windows of restaurants and other businesses that have closed or curtailed service as part of the statewide restrictions to curb the spread of COVID-19. Pony Up, a restaurant and bar near Coors Field, asked him to paint something on the plywood covering the windows.

“I was painting the window and they were doing an outreach to all the industry people, giving them meals and I thought that was really cool,” McGregor said. “I thought, ‘What could I do to help?’”

He painted a dog wearing a mask on the plywood. McGregor then decided to make prints of a painting he had done years earlier of the owners’ dog, dressed up to look like a Renaissance-era portrait. He said he wanted to give the money from sales of the prints to the Pony Up employees.

The Lambs at the Like Minded Productions are working with others in the art community to help during the coronavirus-related business shut-downs. Jon Lamb said his shop got a discount on high-quality paper for prints and is passing on the savings to artists. The shop is also printing the first proof for artists for free.

McGregor’s prints are among those for sale on Like Minded’s site. They include paintings he did for Meadowlark Kitchen and Atomic Cowboy on South Broadway. One is a print of a painting McGregor did of the hamburger that Meadowlark is known for. The other is a mural of Albert Einstein writing the words  “Question everything.”

While the prints are selling, McGregor said he has lost some work, including an $8,000 job. He said a lot of the outdoor work is on hold.

“I have a lot of portraits I’ve been working on at home that people still want,” he said. “Those commissions are still coming in.”

McGregor, a Wheat Ridge native, said he has always drawn. He got his first art job making displays at Tower Records when he was living in the San Francisco area. He started painting murals after seeing an artist paint an advertisement on a building in Portland, Ore. McGregor still free lances for an outdoor advertising company he worked for in New York.

Artist Patrick Kane McGregor immortalizes his English bulldog “Boug” on many of his murals on businesses throughout the metro area including this one he just completed with a COVID-19 theme covering the window at the Meadowlark Kitchen in the River North Art District on April 23, 2020 in Denver.

“They give me the freedom to do my own art. I kind of pick which jobs I want to do,” McGregor said. “They’ll fly me anywhere between (Los Angeles) and New York.”

McGregor’s signature subject is his late bulldog Bouguereau. The dog, who died three years ago, was named after McGregor’s favorite artist, William-Adolphe Bouguereau.

“As I started to have a presence in the art world, one of my fellow artists told me I needed a gimmick. I needed something that people know me by. I went, ‘It will probably be dog portraits because I like dogs more than most people.’ The camaraderie and the love that a human has for a dog, it’s just a cool bond,” McGregor said. “And I feel like it puts smiles on people’s faces.” 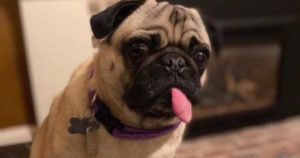 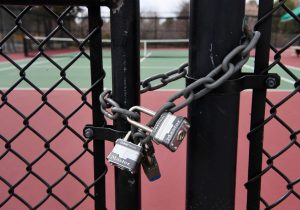